Senate Majority Leader Mitch McConnell (R-Ky.) is under increasing pressure to bring up a revised criminal justice bill despite staunch opposition from conservatives in his own caucus.

The Republican leader has been careful not to take a side on the legislation, even though his second-in-command, Sen. John Cornyn (R-Texas), is one of the bill’s chief supporters.

The normally tight-lipped McConnell will need to walk a fine line as he weighs his decision: Is it worth potentially netting another bipartisan victory ahead of the election — when Republicans have to defend 24 Senate seats — if it would put divisions within his own party under a spotlight?

Supporters of the legislation have spent months making revisions to the proposal aimed at winning over more GOP support, but they have one looming hurdle: getting McConnell to agree to bring it up. 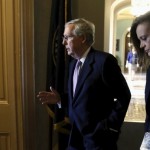 The Daily 202: Why criminal justice reform may actually get done this year—if these two hurdles can be overcome