We find much of our inspiration in the words of leading figures in American history, including:

While our basic principles, in themselves, make America a symbol of freedom and hope for the world, the rights and freedoms guaranteed in our founding documents did not extend to everyone in practice. Tyranny and oppression, inequality and injustice have been an undeniable part of American history.

But we are fortunate that America has these basic principles, along with a moral and religious heritage that lives on, for they have made social reform movements possible. We find inspiration in the words and actions of leaders of such movements, leaders from oppressed communities who fought to extend the rights and freedoms guaranteed in the founding documents to all people, not just those in the majority. These leaders include:

Thomas Paine came to America in 1774 and felt at home because he discovered something remarkable in the American struggle for independence.

The cause of America is in a great measure the cause of all mankind. Many circumstances have, and will arise, which are not local, but universal, and through which the principles of all lovers of mankind are affected…

Every spot of the old world is overrun with oppression. Freedom hath been hunted round the Globe. Asia and Africa have long expelled her. Europe regards her like a stranger, and England hath given her warning to depart. O! receive the fugitive, and prepare in time an asylum for mankind. 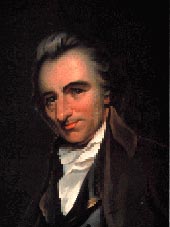 This new World hath been the asylum for the persecuted lovers of civil and religious liberty from every part of Europe. Hither have they fled, not from the tender embraces of the mother, but from the cruelty of the monster…

He wrote these words in Common Sense, a pamphlet that electrified readers when it appeared in the American colonies in January 1776. In this pamphlet, Paine implicated providence in the American cause by suggesting it was, “As if the Almighty graciously meant to open a sanctuary to the persecuted.” Paine wrote against British tyranny and sounded the revolutionary call as the voice of the common man. His words were so inspiring, General George Washington read them to his troops to keep them motivated.

That all Men are born equally free and independent and have certain inherent natural Rights.

Mason authored The Virginia Declaration of Rights, a document that informed the world what was important to Americans. 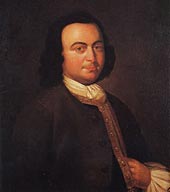 It was Mason who first articulated the clear vision of America as a land of opportunity for all, not just a favored few. He was the first to put in writing demands for the rights to life, liberty, property, happiness, and safety—words that spread the fires of freedom and independence throughout the American colonies. In fact, his vision was part of the intellectual foundation Thomas Jefferson used in drafting the Declaration of Independence.

And it was Mason who had the courage to stand up and zealously fight for the rights of the common man by insisting that a Bill of Rights should be added to the Constitution. It was Mason who argued on humanitarian principles against the slave trade, using powerful, prophetic words:

Every master of slaves is born a petty tyrant. They bring the judgment of heaven on a Country. As nations can not be rewarded or punished in the next world they must be in this. By an inevitable chain of causes & effects providence punishes national sins, by national calamities.

Mason had the integrity to refuse to sign the Constitution because it failed to address the slavery issue; failed to include a Bill of Rights. Despite numerous attacks from supporters of the Constitution, he declared that, “he would sooner chop off his right hand than (sign) the Constitution as it now stands.”

Thanks in large part to his efforts, the Bill of Rights was added to the Constitution after its ratification.

Thomas Jefferson was the leading spokesman for American freedom, democracy, enlightenment and nationhood. He echoed Mason’s vision when he penned the Declaration of Independence in 1776. Some of the most inspiring words he gave us are those that adorn the walls of the Jefferson Memorial in Washington, D.C.:

We hold these truths to be self-evident: that all men are created equal, that they are endowed by their Creator with certain inalienable rights, among these are life, liberty and the pursuit of happiness, that to secure these rights governments are instituted among men. We…solemnly publish and declare, that these colonies are and of right ought to be free and independent states…and for the support of this declaration, with a firm reliance on the protection of divine providence, we mutually pledge our lives, our fortunes and our sacred honour. 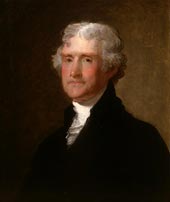 God who gave us life gave us liberty. Can the liberties of a nation be secure when we have removed a conviction that these liberties are the gift of God? Indeed I tremble for my country when I reflect that God is just, that His justice cannot sleep forever. Commerce between master and slave is despotism. Nothing is more certainly written in the book of fate than that these people are to be free. Establish the law for educating the common people. This it is the business of the state to effect and on a general plan.

Almighty God hath created the mind free. All attempts to influence it by temporal punishments or burthens…are a departure from the plan of the Holy Author of our religion…no man shall be compelled to frequent or support any religious worship or ministry or shall otherwise suffer on account of his religious opinions or belief, but all men shall be free to profess and by argument to maintain, their opinions in matters of religion. I know but one code of morality for men whether acting singly or collectively.

“I am not an advocate for frequent changes in laws and constitutions. But laws and institutions must go hand in hand with the progress of the human mind. As that becomes more developed, more enlightened, as new discoveries are made, new truths discovered and manners and opinions change, with the change of circumstances, institutions must advance also to keep pace with the times. We might as well require a man to wear still the coat which fitted him when a boy as civilized society to remain ever under the regimen of their barbarous ancestors.

Susan B. Anthony developed a strong sense of justice early in life, and quickly became committed to a lifelong struggle to gain voting rights for women and equal rights for all—including slaves.

Ignoring opposition and abuse, Anthony became an agent for the American Anti-Slavery Society in 1856, and helped to organize in 1863 a Women’s National Loyal League to support and petition for the Thirteenth Amendment outlawing slavery. They went on to campaign for black’s and women’s full citizenship, including the right to vote, in the Fourteenth and Fifteenth Amendments. When women were excluded, Anthony continued to campaign for equal rights for all American citizens, including ex-slaves.

Martin Luther King, Jr. described himself as “a drum major for righteousness,” and urged America to be faithful to its moral heritage as he led a movement to extend freedom to all Americans. He was a driving force in the push for racial equality, and organized a massive march on Washington, D.C., in August 1963. On the steps of the Lincoln Memorial, he delivered his “I Have a Dream” speech, which is credited with mobilizing supporters of desegregation and prompted the 1964 Civil Rights Act. King was awarded the Nobel Peace Prize the next year.  In his words: 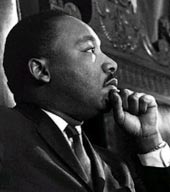 “When the architects of our republic wrote the magnificent words of the Constitution and the Declaration of Independence, they were signing a promissory note to which every American was to fall heir. This note was a promise that all men, yes, black men as well as white men, would be guaranteed the unalienable rights of life, liberty, and the pursuit of happiness… So we have come to cash this check—a check that will give us upon demand the riches of freedom and the security of justice…

“I say to you today, my friends, so even though we face the difficulties of today and tomorrow, I still have a dream. It is a dream deeply rooted in the American dream.

“I have a dream that one day this nation will rise up and live out the true meaning of its creed: ‘We hold these truths to be self-evident: that all men are created equal.’…

“I have a dream that one day, down in Alabama, with its vicious racists, with its governor having his lips dripping with the words of interposition and nullification; one day right there in Alabama, little black boys and black girls will be able to join hands with little white boys and white girls as sisters and brothers…

“And if America is to be a great nation this must become true. So let freedom ring…

“And when this happens, When we allow freedom to ring, when we let it ring from every village and every hamlet, from every state and every city, we will be able to speed up that day when all of God’s children, black men and white men, Jews and Gentiles, Protestants and Catholics, will be able to join hands and sing in the words of the old Negro spiritual, ‘Free at last! free at last! Thank God Almighty, we are free at last!'” 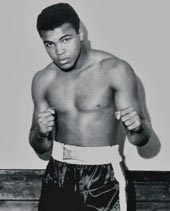 Muhammad Ali is a man of great principle and the strongest possible integrity who performed heroically both in and outside the ring. He had the courage to risk his career by standing up and speaking his mind—loudly; marching to his own drummer; confronting and attacking injustice. He handled himself well as he made lasting contributions to American society, helping to get people to stop and think; helping to change social attitudes permanently. He was always willing to face the consequences of his actions, took his knocks and kept coming back.

Ali did not pursue a political agenda, and had no organization behind him. He stood on his own. He was simply a man who knew right from wrong.

One of the injustices he fought was segregation and discrimination. In his own words:

I’d like to see peace on earth, and if integrating would bring it, I’d say let’s integrate. But let’s just not stand still where one man holds another in bondage and deprives him of freedom, justice, and equality, neither giving him freedom or letting him go to his own.

I never thought of myself as a great man. I never aspired to be anything like that. I was just a guy trying to get through life. But… with Ali, I saw a man accepting special responsibilities, someone who conducted himself in a way that the people he came into contact with were better for the experience. Philosophically, Ali was a free man. Besides being probably the greatest boxer ever, he was free. And he was free at a time when historically it was very difficult to be free no matter who you were or what you were. Ali was one of the first truly free people in America.

…Ali represents America to me; power at its best, power well used, because real power is individual power. And each time we reconsider Ali now, we realize there’s more to him and more value than we realized before.