WASHINGTON, D.C. – Russian President Vladimir Putin on July 7 signed into law a package of anti-terrorism measures the Russian State Duma passed in late June.  The U.S. Commission on International Religious Freedom (USCIRF) strongly condemns these measures.  Under the guise of confronting terrorism, they would grant authorities sweeping powers to curtail civil liberties, including setting broad restrictions on religious practices that would make it very difficult for religious groups to operate. On June 23, President Putin signed into law yet another problematic measure: It authorizes the police to arrest people suspected of violating “generally accepted norms of social behavior,” thereby giving authorities another weapon to use against disfavored groups, including religious organizations.

The Russian government uses its current anti-extremism law to target religious communities because the legal definition of extremism does not require the threat or use of violence.  “Extremism” charges can include the peaceful promotion of “the superiority of one’s own religion,” and have resulted in religious texts being banned and members of non-violent Muslims groups and Jehovah’s Witnesses imprisoned.  The proposed anti-terrorism measures would increase prison terms under the current extremism law. 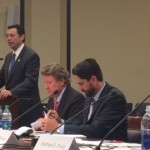