WASHINGTON (BP) — Southern Baptist ethicist Russell Moore has joined a diverse collection of religious liberty advocates to urge members of Congress to reauthorize an important federal panel on global religious freedom as the deadline for doing so nears.

Moore, president of the Ethics & Religious Liberty Commission, and 85 others signed onto a letter calling for reauthorization of the U.S. Commission on International Religious Freedom (USCIRF) by Sept. 30. The current authority for the panel expires on that date.

In their Aug. 24 letter, Moore and his allies with the International Religious Freedom (IRF) Roundtable said USCIRF “has been vital to elevating the promotion of religious freedom in U.S. foreign policy.” The commission “can be counted upon to give an unvarnished view of the state of religious freedom in any given country regardless of the complexities of the bilateral relationship between our respective governments,” according to the letter.

The ERLC’s Moore told Baptist Press, “Religious liberty isn’t an American privilege. It’s a fundamental human right shared by every single being that has a conscience.”

USCIRF “plays a crucial role in standing up for soul freedom against tyranny around the world,” he said. “My prayer is that Congress would recognize this and stand on the side of liberty by passing this bill.”

Robert George, USCIRF’s chairman, told Baptist Press the “dire circumstances of religious freedom across the globe” make the commission’s work “more important — and urgent — than ever.”

“It is critical that the commission be reauthorized, and reauthorized on terms that do not weaken its ability to fulfill its mission,” George said in comments emailed to BP.

“I am personally deeply grateful to the member groups of the IRF Roundtable for their strong support for USCIRF’s reauthorization,” said George, professor of jurisprudence at Princeton University. “The Roundtable and its member groups are among our greatest allies in the fight to protect religious freedom and defend victims of persecution on the basis of religion or belief.”

If Congress does not reauthorize USCIRF by Sept. 30, the commission must shut down its operations. Apart from approval of a bill reauthorizing the panel, Congress could extend USCIRF’s ability to function by including it in a continuing resolution, which is a short-term funding measure.

In their letter, the members of the IRF Roundtable called on the leaders of the Senate Foreign Relations Committee to extend the commission’s authority by working for passage of the USCIRF Reauthorization Act, S. 1798.

The legislation will not only reauthorize USCIRF for six years but strengthen the commission’s “mandate and the tools at its disposal,” according to the IRF Roundtable letter to Sen. Bob Corker, R.-Tenn., and Sen. Ben Cardin, D.-Md. Corker is the Foreign Relations Committee chairman, while Cardin is the lead Democrat on the panel.

The signers encouraged adoption of S. 1798 rather than another reauthorization bill, the Further Independence of Religion for Security and Tolerance Freedom Act, S. 1860. They said S. 1798 “is better suited to advance freedom of religion or belief” because S. 1860 includes refugee-related provisions that are part of a debate that is unlikely to be settled in time for USCIRF’s reauthorization. The signers also said S. 1860 includes measures that “could potentially undermine” USCIRF’s work.

Like the Senate, the House of Representatives has yet to pass reauthorization legislation for the commission.

USCIRF came into existence in 1998 upon the enactment of the International Religious Freedom Act by Congress and President Clinton. Evangelicals helped lead the effort to gain passage of the legislation after the widespread persecution of Christians and other religious adherents overseas gained attention in the mid-1990s.

The commission makes an annual report on global religious freedom, as well as periodic reports on particular countries. In its yearly report, USCIRF includes recommendations of governments it believes the State Department should designate as “countries of particular concern,” a label reserved for the world’s most severe violators of religious freedom.

While conditions have improved in some countries through the efforts of USCIRF and the federal government, religious repression or persecution of Christians and others has continued or mounted in recent years in such countries as Iraq, Syria, Nigeria, Iran, Pakistan, Egypt and North Korea. About 77 percent of the world’s population lives in countries with high levels of religious restriction, according to the Pew Research Center.

The IRF Roundtable — a loosely organized group of non-governmental organizations that meets regularly for conversations about religious liberty overseas — acknowledges its participants do not agree on many theological or political issues. They agree, however, on the significance of religious liberty, including its role as “the ultimate counter-terrorism weapon, pre-emptively undermining religious extremism,” according to the Aug. 24 letter. 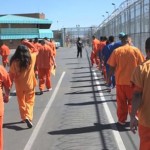