Mitchell Speaks at Conferences on Religion, Security and Citizenship in Kyrgyzstan and Nepal

From 24 February-2 March 2014, the Institute for Global Engagement (IGE) held two successive conferences focusing on religion, security, and citizenship in Central Asia and South Asia. The first conference was held in Bishkek, Kyrgyzstan in partnership with the Carnegie Endowment for International Peace and the Institute for Public Policy.  The second conference took place in Kathmandu, Nepal in partnership with the Pak Institute for Peace Studies (PIPS) and the Beijing-based Institute for Ethnic Minority Groups (IEMG), a government-think tank.  Both conferences featured participants from multiple countries in the region drawn from government, academic, religious, and civil society sectors.

Greg Mitchell spoke at both conferences, as co-chair of the International Religious Freedom (IRF) Roundtable.

At the Bishkek conference, Mitchell moderated the “International Perspectives” session and delivered remarks that included a description of the IRF Roundtable and a summary of the Roundtable’s ongoing dialogue with the Kazakh government regarding the 2011 Religion Law. This session  included a keynote presentation by Mira Karabaeva, Chief of the Department of Ethnic, Religious Policies and Interaction with Civil Society in the Office of the President of the Kyrgyz Republic. Ms. Karabaeva said the Kyrgyz government has created a working group in order to develop a concept document that will guide the government’s increasing regulation of religion, and this working group is gathering inputs from stakeholders.

Mitchell proposed a series of roundtables that would allow the Kyrgyz government to engage in an ongoing, meaningful and transparent dialogue with religious and civil society leaders as it is reviewing its religion policies and shaping new regulations. It is important that this policy review be informed by an open and honest dialogue between government and grassroots leaders, and Mitchell offered the assistance of the IRF Roundtable in this direction. The Roundtable can bring international experts to the process.

The Kathmandu conference, “The Impact and Implications of the Arab Spring” & “Religion and Security,” focused on two broad themes: 1. The effects and influence of the Arab Spring on the Middle East region and the world, and 2. Education and extremism: The role of religious and secular education in countering violent extremism.

Mitchell was a panelist on the “Comparative Perspectives on Religion, Security and Citizenship” session, which was chaired by former U.S. Congressman Geoff Davis. Mitchell delivered remarks that included a description of the IRF Roundtable and a summary of the Roundtable’s dialogue with the Kazakh government regarding the Religion Law.

For the Chinese, this conference provided a neutral venue to freely discuss sensitive issues related to religion, education, security, and citizenship, particularly in the context of Muslim communities. 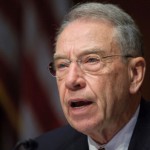